Fill out this form and we’ll be in touch with you shortly!

The Inescapability of Curvilinear Design

There’s no doubt that curvilinear design is inescapable right now. It’s as though every second build we see features an archway or rounded furniture. So where did this design originate from and how has it been revived from its hiatus?

First dating back to 2BC, archways have been a prominent design trend. Although we now view them as an aesthetic touch to any design, they once served as a functional design choice that could support heavy loads. Arches were commonly used by the Greeks and Egyptians but were then popularised by the Romans as they incorporated arches into monumental architecture. As there is a history of them being used in monumental designs, it gives the notion of arches being grand and prominent. 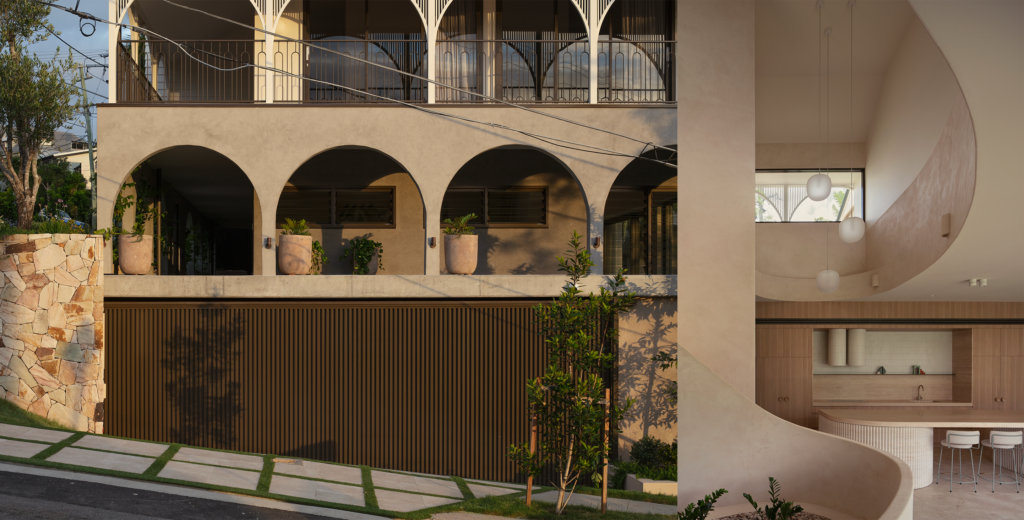 INSPIRED BY | Arcos Villa By Graya

According to a 2013 architectural study, humans display more favourable views toward curvilinear design as opposed to rectilinear design. Thus, given the circumstances of COVID-19 lockdown causing more people to spend time in their homes surrounded by rectilinear design, it is unsurprising that curvilinear architecture is making its comeback. Also, according to Brosa, “curves imply relaxation, luxury and comfort, all of which have been important tenets to uphold as the world remains wildly unstable”. 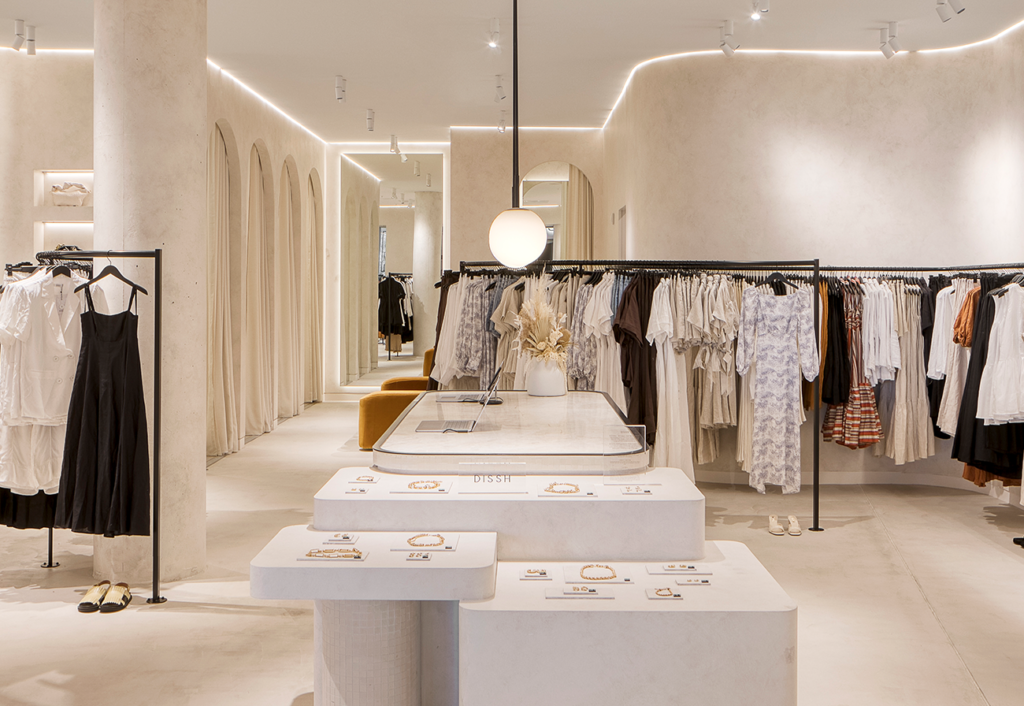 Although things like archways are seen in residential spaces, they’re also flowing into commercial sectors. As an example, built by Unita and located in Sunshine Plaza, Dissh’s store underwent a major redesign of their stores to signify their brand’s new upscale and luxurious look. They opted for fitting rooms with large archways as well as and curved walls and furniture that complement the space. Similarly, Australian designer Aje also saw a new store look. Their Claremont store also incorporated archways along with complimentary rounded mirrors. In addition, their material choices elevate the space through subtle textural finishes and a neutral colour palette. 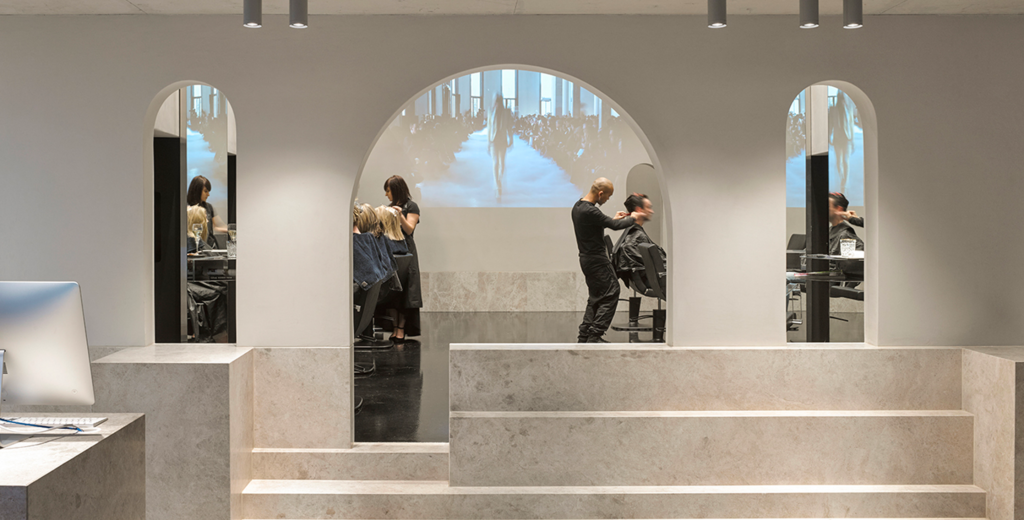 Not only are these archways being featured in the retail world, but they’re also in the health and beauty industry. Newstead-based hair salon, Salon X Papas took their salon’s design to the next level by paying homage to the owner’s Greek heritage. Salon X Papas’ design echos the salons desire to be seen as the best. Designer, Hogg and Lamb included archways in the entries as well as the decor to provide a consistent experience. From polished granite floors to marble walls, the salon screams premium European. 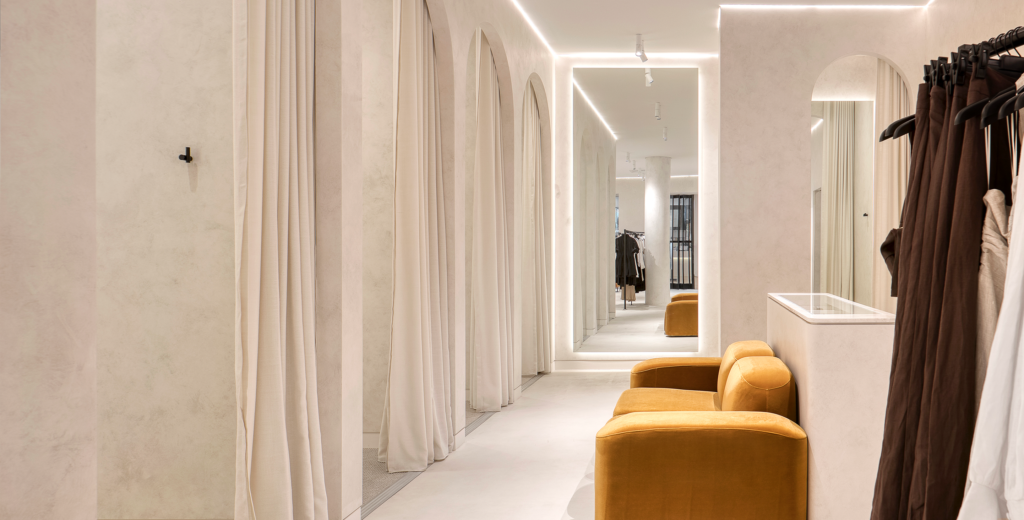 With the rise in archway incorporations, this style has also influenced furniture choices. As such, furniture is becoming more curved and rounded. As an example, the Muse sofa, designed by Sarah Ellison, has become a popular piece that’s often made the focal point in many spaces (like Dissh Sunshine Plaza). The mirroring of architecture in furniture helps tie the space together, ensuring a cohesive aesthetic. Designer, Oliver Haslegrave commented on the post-covid popularity of curvilinear furniture saying, “Curves are welcoming – they have a stronger emotional impact than rectilinear spaces”

As curvilinear design has made a comeback, we’re interested to see how long it will remain in style. Given that COVID lockdowns have eased and time spent indoors has drastically minimised, will we be resorting to a new design trend?

Thinking of a refurb? Drop us a line!

Convenience Is King in a Commuter’s World

As COVID-19 restrictions settle and we return to a sense of normality, there is an influx of commuters on our streets. However, with more people on the go, consumers are seeking convenience. We're looking at how small-format cafes are changing the hospitality space and how you can do it better than competitors.

We are thrilled to continue our partnership with Nodo Pty Ltd to deliver their latest kiosk, again designed by the talented Cameron & Co Architecture!

A big consideration when designing your fit-out colour. We often see workplaces with bland generic fit-outs, but with the return to the office we think it’s about time we make our workplaces more lively. We're diving into how colour can be incorporated into your workplace fit-out to lift your staff's moods and cure the Monday blues.